Inspired by a young woman’s courage in the face of breast cancer, The Cricket Fund Beyond Diagnosis, Inc. gives hope and provides cancer patients with financial assistance.

Our Mission
The mission of the Cricket Fund Beyond Diagnosis is to assist cancer patients with resources and financial aid for everyday expenses to ensure that they can focus on the most important part of their journey... THE RECOVERY

~ The Cricket Fund Beyond Diagnosis 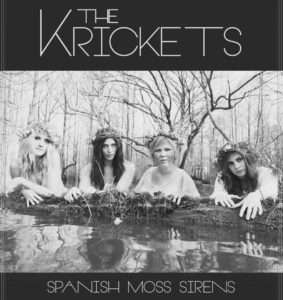 The Krickets are a female swamp folk group from Florida's Gulf Coast. Produced by Ben Tanner of the Alabama Shakes, they released their debut album 'Spanish Moss Sirens' in May of 2016. Folk harmony-driven with an earthy acoustic instrumentation, the music is what Paste Magazine describes as "a truly stunning, one-of-a-kind sound."

Recently named the 2016 IMEA Folk Artist of the Year and recipient of the 2016 Folk/Singer Songwriter Song of the Year at The Independent Music Awards, the group originally came together to play a cancer benefit in honor of Kristina "Cricket" Russell. Now, they are able to support the cause by donating a portion of every album sale to The Cricket Fund Beyond Diagnosis which provides cancer patients with financial assistance for everyday expenses. thekrickets.com

Funded in part by: Sacred Heart on the Gulf Volunteer Guild